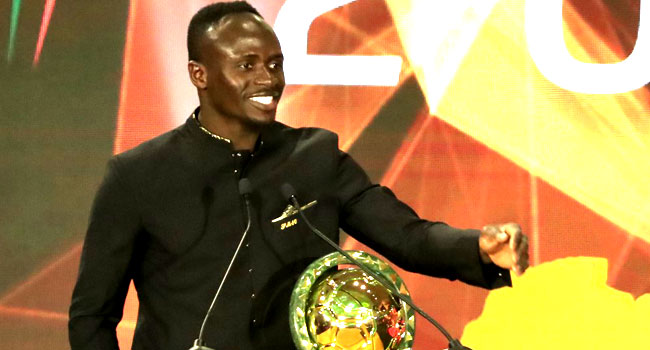 Senegalese striker and Liverpool star Sadio Mane has been crowned as the 2019 African Player of the Year.

The 27-year old Senegalese striker claimed the top prize for the first time on Tuesday at the 2019 CAF Awards ceremony held in Egypt.

However, neither Salah nor Mahrez attended the event.

Giving his acceptance speech, Mane said, “I am really happy and at the same time I am really proud to win this award. It’s a big day for me.”

According to CAF statistics, the Senegalese scored 34 goals and made 12 assists in 61 appearances last year.

The Pride Of Nigeria

In the female category, Super Falcons’ Captain Asisat Oshoala was named as the 2019 African Women’s Player of the Year.

Oshoala, who plays for Spanish side Barcelona, beat Ajara Nchout of Cameroon and South Africa’s Thembi Kgatlana, who was crowned in Senegal last year to claim the title.

It is the fourth time the 25-year-old is being crowned the best African female footballer.

Shortly after she was announced as the winner, Oshoala took to Twitter to thank her family and friends, as well as her fans and colleagues locally and internationally for their support.

The award for the youth category was given to Morocco’s Achraf Hakimi of Borussia Dortmund.

The Egyptian Football Association won the Federation of the Year award.